On the Trail & ‘Round the Campfire

Welcome to my little diversion from the daily grind. Pull up a log or, just sit on yer’ fist and lean back on yer’ thumb (put a smiley face here) and let’s share a moment. I’ll throw another blog in the fire every now and then and, we’ll chew the fat about such mundane things as birds, nature, cowboys and the southwest, USA. I may even wax poetic or philosophical occasionally, but always honoring our creator. If you like something you read, please leave yer’ tracks. 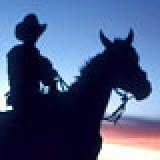 Some stories seem naturally worth repeating, sometimes as poetry, especially if they can be freshened up with a new perspective or little-known fact. Like gold, the tale is where you find it. Whether it is well known or not, each has its own fascination that keeps the regional history alive.

Posted by Ed Keenan on Friday, 22 November 2013 in Cowboy Poetry 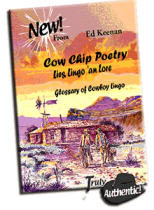 Cowboy poetry and story tellin' date back to the earliest cowboys, the earliest of which were black. Around the campfire, after chuck, cowhands would naturally talk and brag about themselves, and entertain each other with poems and songs and tall tales known as "windies". They bragged about their exploits and work and would often reminisce about back home, or times past.

"Windies" in the form of story tellin', braggin' and tall tales developed in to an art form. (Some hifalutin' folks might question that.) Generally there was an element of humor or drama to their stories. Over time some of these stories were told by means of poetry, the more unbelievable the tale or poem, the more enjoyable. Poetic lines could make a story more interesting and often added another dimension to the humor or drama.

Legend of The Lost Pegleg—

Posted by Ed Keenan on Monday, 01 July 2013 in Cowboy Poetry

Probably no other tale of lost gold fires the imagination more than the famous “Lost Pegleg.” It is a tale believed by many a treasure hunter, would-be prospector and desert enthusiast. Much believable detail, and even (so-called) proof of finding his gold nuggets, has been added to the 150-year-old pile of sincere mendacities—enough to make many more believers out of honest agnostics.

My dad was a serious prospector during the 1940s and 50’s. So, growin’ up as a kid, I heard this yarn told by him and other country folks many times. No matter how many times the story of Pegleg was told, it never failed to inspire the imagination of us kids, and those who listened to it.

So it’s only natural that in my soon-to-be-released second edition of CowChip Poetry —Lies & Lingo and Lore,” I have written a narrative poem of this historical character, Pegleg Pete, a.k.a. Pegleg Smith. This is my version of the Pegleg tale, as I remember it being told. If yer’ interested, you’ll find a fascinating, in-depth history of Pegleg at: www.desertusa.com

Legend of The Lost Peg-Leg

There's all sorts of wild desert tales
Surroundin' Peg-leg Pete,
How he found black gold and lost it
Blazin' a trail in desert heat.

Cowboy and The Constable

Posted by Ed Keenan on Friday, 01 February 2013 in Cowboy Poetry

Cowboy and The Constable

The cowboy was fishin' where it was posted

When a Ranger rides up with book in hand

Posted by Ed Keenan on Thursday, 24 January 2013 in Cowboy Poetry

For lack of better things to do after a hard days work on the range, cowboys of the old west would sit around the campfire in the evenin' and entertain one another with poems and tall tales, known as "windies". Many of their tales and poems are derived from real life experiences. 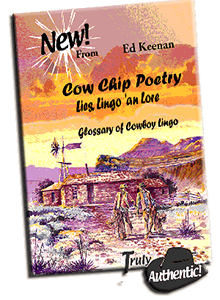 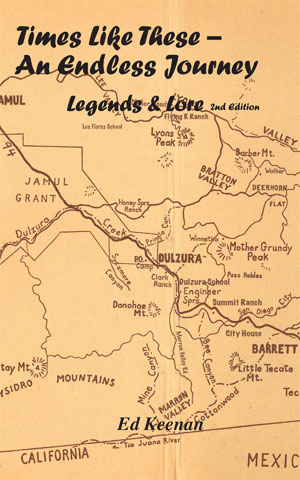